The growth trend of BAU China continues. The leading trade fair in the Asia-Pacific region for ‘Building Systems Solutions, High-End Technologies and Materials’ thereby proves its status as the leading trade fair for the Asian market. The extensive accompanying program, including BAU Congress China and Fenestration Days China, puts the industry's trend topics on the agenda. As part of the China Architecture and Design Expo (CADE) special exhibition, the ‘Airport Building’ exhibition area will shine a light on Beijing's new giga project: the recently completed Beijing Daxing International Airport.

From November 5 to 8, the Shanghai New International Expo Centre (SNIEC) in the Chinese metropolis will once again be the meeting place for the construction industry from all over Asia. Reinhard Pfeiffer, Deputy Chairman of the Board of Messe München, is content: “The list of exhibitors is filling up: about 650 national and international companies will present themselves.” In terms of exhibition space, the trade fair has once again grown compared to the premiere in Shanghai in 2017, “from eight to ten halls at the SNIEC,” says Pfeiffer.

The trend topics of BAU China continue to be sustainability, energy efficiency and the implementation of smart construction solutions. Visitors can find out more not only from the exhibitors, but also during the supporting program. The technical accompanying program highlights the future of the industry and picks up on some hot topics. One example is the BAU Congress China where renowned national and international architects present practice-oriented solutions. At the Fenestration Days China, the latest technologies and trends in windows and doors will be presented, and the Prefabrication Materials & Green Building Forum will focus on “green” technologies and modern production processes. In addition to the presentations of the exhibitors, the program rounds off the event and provides a crucial added value for exhibitors and visitors.

As from September 30, first flights will be handled at Beijing Daxing International Airport, Beijing's new airport. After almost five years of construction, the country's largest transport hub has now come to life in China's capital. According to forecasts, the airport will handle more than 100 million passengers per year in the future. Beijing's new hub for people and goods will take over from Hartsfield-Jackson Atlanta International Airport in the US as being the busiest airport in the world. 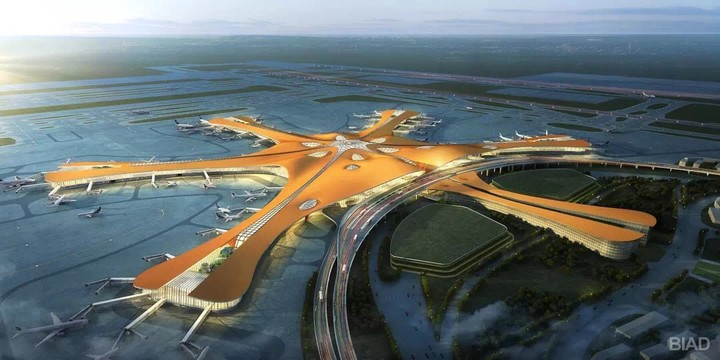 As part of the China Architecture and Design Expo (CADE), which BAU China is organizing in cooperation with the Architectural Society of China, there will be a separate section on the topic of ‘Airport Construction’ this year. Beijing Daxing International Airport will be presented there. Visitors thus gain interesting insights into the prestigious construction project. From the design draft of the British architecture firm Zaha Hadid to the conception, planning and construction of the project.

High-End Technologies and Materials' in the Asia-Pacific region. The trade fair emerged from Fenestration China, in which Messe München acquired a majority stake. In 2017, the event was held under the new name FENESTRATION BAU China for the first time. The established BAU Congress China was integrated into the trade show. In 2018, 656 national and international exhibitors presented their offerings from the areas of building materials, construction IT, facades, windows, building automation, building technologies and doors. The exhibition attracted around 100,000 visits. The next exhibition will take place from November 5 to 8, 2019, in Shanghai under the new name BAU China.

With more than 50 self-organized exhibitions for capital goods, consumer goods and new technologies, Messe München is one of the world's leading trade fair organizers. Every year, more than 50,000 exhibitors and about three million visitors participate in more than 200 events at the exhibition grounds in Munich, at the ICM – Internationales Congress Center München, at the MOC Veranstaltungscenter München as well as abroad. Together with its subsidiaries, Messe München organizes exhibitions in China, India, Brazil, Russia, Turkey, South Africa, Nigeria, Vietnam and Iran. With its network of associated companies in Europe, Asia, Africa and South America as well as about 70 foreign agencies for more than 100 countries, Messe München is represented throughout the world